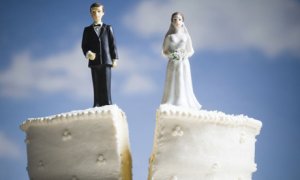 On an idyllic, windswept beach, the minister says the magic words, “man and wife”.  The couple embraces as family and friends cheer.  Two years later, they purchase their dream home.  She fusses with paint chips and swatches.  He putters around making minor repairs on the weekends.  Both feel invested in the property.  Eight years after that, she can’t remember what she ever saw in him and he can’t stand her spendthrift ways one more minute.  And, like 40-50% of their fellow Americans, they decide to divorce.  There are no children, just the division of property, so the break should be quick, clean and painless, right?

Going through divorce and its attendant property division is one of the most stressful events that can occur in a person’s life.  The marital home is frequently the most valuable asset a couple has both in terms of money and care invested.  Add that to the often negative emotions that swirl around even the most civilized divorce and there lies the potential for a lot of poor decision-making, thus dragging the process along for an eternity.  Here are some things related to real property that can turn divorce into a never-ending ordeal:

THE ‘MUST WIN’ MENTALITY:

Many divorcing couples see the property division in particular as a way to ‘win’ over their spouse.  One party will often insist on hanging onto the property, even though it makes no fiscal sense whatsoever, simply out of spite or revenge.  Keeping the house often means taking a cold, hard look at a reduced income, mortgage qualifying and all the expenses that go with maintaining a home, like property taxes, insurance and maintenance, not looking at it as a ‘score’ off the other party.

While most couples make a large financial investment in their home, sometimes the emotional investment is even greater.  One spouse may want to hold onto the property out of sentimental attachment instead of looking at the situation through a more business-like lens.  Of course, the opposite is also true:  The memories associated with a property may be so toxic that the parties can’t get rid of it fast enough.  Approaching the sale of the home from a business standpoint helps ensure that the decisions made, unclouded by emotion, make the best fiscal sense.

Let’s say the couple in our scenario have just separated.  The wife has spent herself into a massive hole and suddenly discovers that, without access to her husband’s income, she must declare bankruptcy.  Prior to 2005, unforeseen illness and injury was the main reason people filed for bankruptcy.  Now, divorce is among the most frequently reported filing reasons, along with job loss and credit debt.  Approximately 15% of filers are divorced. Depending under what Chapter she files, the divorce could be prolonged for years to come.  Filing bankruptcy issues an automatic stay.  This is essentially a restraining order against the world, stopping any future collection procedures, including marital property division, until such time as the stay is lifted.  If a Chapter 7 liquidation plan is filed, a bankruptcy trustee has the responsibility of determining which assets are part of the estate.  In a Chapter 7 scenario, it’s likely the marital home would be sold by the trustee to pay off the mortgage.  If a Chapter 13 repayment plan is filed, permission must be obtained from the trustee to continue dividing the marital property since a Chapter 13 plan typically takes from three to five years to complete.

Sometimes one spouse will transfer their interest in the marital home to the other through a quitclaim deed.  Before signing, though, one should know what a quitclaim deed is, what it does and what it doesn’t do.  What it does is transfer the interest of one spouse (the “Grantor”) in the property to the other (the “Grantee”) at the time of transfer.  It does not remove the Grantor from a mortgage nor eliminate the Grantor’s responsibility for making mortgage payments; only a refinance or sale of the property can accomplish this.  The Quitclaim Deed also does not account for an interest in the property that might be acquired at a later date.  A properly executed Interspousal Transfer Deed relinquishes all claim of community property in the home and is exempt from transfer tax.

Over the years, couples have certainly come up with some creative ways to avoid selling the home they’re both attached to.  Sometimes they’ll agree to live as roommates up to and including schedules of use for the kitchen and bathroom and duct tape marking a sort of Mason-Dixon line between his side of the room and hers.  If there are children involved, sometimes a couple will agree to keep the home and the attendant expenses involved in order to keep the kids from being uprooted.  This scenario requires a certain amount of trust not usual found in situations of divorce.  In any event, if an alternative compromise is reached, the terms should be put in writing and care should be taken to ensure everyone understands and agrees to the arrangement.

So now that we know what can drag out the divorce process with regard to property division, can anything be done to shorten it?  With the highest number of investors involved in house flipping since 2007, one way is to sell the home to an investor for cash.  These sales are quick (close within 10 days), require minimal paperwork and involve none of the usual showing hassles like repairs, staging and vacating the home for showings.  There are drawbacks, though.  An investor is likely to offer below market value for the home and the investor is not legally obligated to disclose his or her plans in that regard.  Think of the scene in the movie “Father of the Bride II” where Steve Martin’s character sells his long-cherished family home only to find it under the wrecking ball 24 hours later.  A seller should also take the time to research an investor to make sure the deal is not a scam.  A deal of this nature should be reviewed carefully; sellers going through divorce should ask themselves if the low offer is worth eliminating the hassles of selling up to and including prolonged contact with the soon-to-be ex.

The question of what to do with the marital home during divorce can prolong a process already fraught with delay and frustration.  But if both spouses can approach the property division without feelings of revenge or sentimentalism, they can both leave the arena with a minimum of open wounds ready to move on to the next chapter in their lives.

The process as super easy. They were ready to close, but gave me the time I needed to move and even helped assist me in my move by providing a moving truck, which I didn’t expect at all. I can’t speak highly enough of Home Buyers MA – C. Renaud

Home Buyers Ma were very easy to work with. they kept their word from start to finish. They were very knowledgeable and we were able to close and finalize everything very quickly. I would definitely recommend them 100% – R. Adams

“Quite often investors are willing to pay cash for a home and with the recent tightening of financial restrictions, coupled with the growing number of complaints about low appraisals, having a cash buyer has become even more appealing.”

Get Your Fair Cash Offer: Start Below!